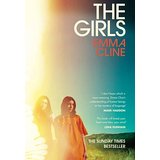 The Girls by Emma Cline
Published by Chatto & Windus in 2016
Pages: 368
My copy: Library

Evie Boyd is desperate to be noticed. In the summer of 1969, empty days stretch out under the California sun. The smell of honeysuckle thickens the air and the sidewalks radiate heat.

Until she sees them. The snatch of cold laughter. Hair, long and uncombed. Dirty dresses skimming the tops of thighs. Cheap rings like a second set of knuckles. The girls.

And at the centre, Russell. Russell and the ranch, down a long dirt track and deep in the hills. Incense and clumsily strummed chords. Rumours of sex, frenzied gatherings, teen runaways.

Was there a warning, a sign of things to come? Or is Evie already too enthralled by the girls to see that her life is about to be changed forever?

I had heard so much about this book, and was keen to read it to see what the fuss was about. I knew it was loosely based on the story of Charles Manson, so I read up a bit about this before reading the book. Having done so, the book has many similarities to that of the notorious murderer.

Narrated by 14-year-old Evie, we are transported back in time to the summer of 1969 where she meets a group of free-living hippie girls, who she is immediately drawn to. Her mother is busy working and dating, so doesn’t have much time for Evie, making it easy for her to spend increasing amounts of time with the group. They are led by the enigmatic Russell, who all the members of the group cling on to.  He is mysterious and deep, and is definitely the leader.

Evie gets completely drawn into her new surroundings and the sex and drugs that go with them. This book is definitely not for the faint-hearted as there is a lot of bad language, swearing and drug taking – not to mention violence. You have been warned!

Although Evie is sucked into the group and is, in the main, welcomed, you never feel that she really quite fits in. She doesn’t have the same damaged backgrounds as the others seem to have and she is never quite one of the crowd. This becomes more apparent than ever in the closing, fateful scenes…

I found the book very easy to read and didn’t want to put it down – despite not very much actually happening! You obviously know where the story is leading (and even without any knowledge of the Manson case, it is made clear from the start), but this didn’t stop the novel from being quite compelling. I also liked the sections set in the present day, where we find out where Evie is now – this could have distracted from the main story but I felt worked well in breaking it up.

But there is a danger of retelling a well-known story, and if you know the very basics of the Manson case, and read the blurb, then you pretty much know exactly what is going to happen in the novel. There are no major twists or surprises, and I think this is why I did feel slightly underwhelmed overall when I finished the book. As readable as it is, I wasn’t quite sure why there is quite so much hype surrounding the novel. It’s a good beach read, but definitely not the masterpiece some are making it out to be.