I’ve recently read a few short novels, so I thought I would review them all together here…

The Time Keeper by Mitch Albon

I actually read this a few years back and really enjoyed it, so I picked it up for the second time and read it in a matter of hours. It’s an unusual story and not my usual kind of thing – we travel back thousands of years as a young boy becomes fascinated with the sun and shadows, and inadvertently invents time.

He is then cast away for 6,000 years, and has to listen to the misery his invention has caused, as people throughout the intervening years are constantly crying for more or less time.

Back on earth in the modern day, we meet two very different characters, one who is begging for more time and another who is desperate for time to fly. Then our poor castaway has to come and save them.

I really love this story – it is unique and thought-provoking. A lot of the book is completely fantastical, but if you suspend disbelief it’s an enjoyable, quick read and the idea of it is really clever and interesting. I would definitely recommend this if you want to try out something a bit different, that isn’t going to demand too much of your time!

This novel had been on my wishlist for ages, and I spotted it in the library just this Saturday and read it straight away. It’s another short novel, about 175 pages, so again this 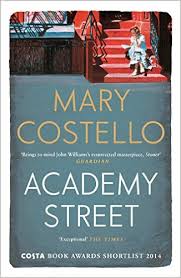 didn’t take much time at all for me to read. It follows Tess over six decades, beginning with her mother’s death which shapes the rest of her life as she travels to America in her twenties and then falls pregnant after a one-off encounter with a man with whom she has fallen in love.

The story is told in a very simple way with short sentences and a very factual style, and very little dialogue. I found Tess’s story really interesting and I enjoyed her earlier years and learning about her family. But as the book progressed I did find myself losing interest in her story. I think my main problem with it was it was so unrelentingly glum and depressing and at the end I felt pretty deflated. Tess is a very quiet and accepting character, and although this is kind of the point of her character, I just found her increasingly frustrating and was pretty much fed up with her by the time I’d got to the end.

I did quite like this novel, but by the end of it I just felt that the main character was too irritating and the story as a whole was too miserable to really enjoy.

Before the Fire by Sarah Butler

Stick and Mac are two 17-year-old boys about to embark on the adventure of a lifetime by driving to Spain. But then the day before they are due to leave, everything goes wrong and Stick is left to deal with the aftermath.

This is a really easy read and another novel I read in just a day. It is told in the third person but entirely from Stick’s point of view – and frankly he isn’t a very likeable character. The book is full of swearing, drinking and a smattering of sex – which didn’t bother me and actually made the book feel quite realistic and gritty. We follow him as he tries to come to terms with his grief, but being a teenage boy he is full of pent-up anger and the feeling that no-one understands him.

This isn’t a brilliant book but I did find it very easy to read and I didn’t want to put it down. However I did find it all got a bit too dramatic at the end and it didn’t feel to me like it had a good conclusion.