The Wild Girl by Kate Forsyth
Published in 2013 by Allison and Busby
Pages: 544
My copy: Library 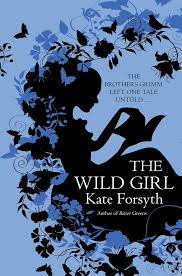 Once there were six sisters. The pretty one, the musical one, the clever one, the helpful one, the young one …And then there was the Wild one. Dortchen Wild has loved Wilhelm Grimm since she was a young girl. Under the forbidding shadow of her father and the tyranny of Napoleon’s army, the pair meet secretly to piece together a magical fairy tale collection. The story behind the stories of the Brothers Grimm.

I loved Bitter Greens when I read it earlier this year (you can read my review here), so wanted to check out The Wild Girl which seemed like it would have a similar style and theme. As with Forsyth’s previous novel, it is based on real characters but with a fictional twist.

The novel kicks off around 100 years ago as we are introduced to Dortchen and her many sisters. We are given a real sense of the time with a lot of talk of the war and Napoleon’s advance through Europe. The author also does a great job of setting the scene with descriptions of the clothing and food of the time. Dortchen’s father is a pharmacist and it is fascinating reading about Dortchen collecting various herbs to make medicines, as well as interesting ingredients for their supper – including acorns to grind into flour for bread.

The romantic tension between next door neighbour Wilhelm and Dortchen is built up from the start of the book, and their blossoming yet secret relationship is at the heart of this story. I enjoyed how these characters developed and also the ways in which Wilhelm and his brothers gathered tales for their books. Their lives are hard, as the war around them constantly affects their lives – and Dortchen has the additional problem of a violent, tyrannical father.

As with Bitter Greens, this is very well written, enjoyable and easy to read. You can tell a lot of research has gone into the book, and it certainly made we want to find out more about the real lives of the characters in the novel. However, as with Bitter Green, I felt this novel was too long at over 500 pages. The story isn’t exactly action-packed, and while this isn’t a problem for me I did think that the story was repetitive at times and it dig drag in places. Despite this, it remained readable, but I felt that about 100 pages or so could have been lopped off with no great detriment to the story.

The story is ultimately a love story, but there is much more to it than that, and it does give a fascinating look at the time when these characters lived. As a work of historical fiction I really enjoyed it, but could have done with it being a bit shorter.