Before I Die by Jenny Downham
Published in 2007 by David Fickling Books
Pages: 336
My copy: Kindle 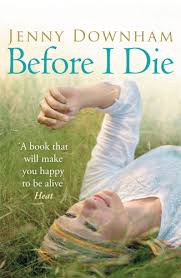 Tessa has just a few months to live.

Fighting back against hospital visits, endless tests, drugs with excruciating side-effects, Tessa compiles a list. It’s her To Do Before I Die list. And number one is sex.

Released from the constraints of ‘normal’ life, Tessa tastes new experiences to make her feel alive while her failing body struggles to keep up.

Tessa’s feelings, her relationships with her father and brother, her estranged mother, her best friend, her new boyfriend, all are painfully crystallized in the precious weeks before Tessa’s time finally runs out.

I started this novel last night and was instantly sucked it, and finished it in less than 24 hours (not reading solidly of course!). It pulls you right in as Tessa determines to cross the first thing off her to-do-before-I-die list, which is to lose her virginity. She has the help of her rebellious friend Zoey with this and other tasks on her list, but her family – and often her illness – tend to get in the way of her final wishes.

This is naturally an emotional book, and it’s very character-focused – which it has to be as we pretty much know what is going to happen and there aren’t very many massive twists or turns in the book. Tessa herself is actually quite unlikeable at times, although often her reactions and mood swings are understandable. We also learn about how other characters around her are dealing with Tessa’s illness. Her dad, who is in denial and spends his free time looking up holistic cures for Tessa’s cancer, her brother Cal – probably my favourite character in the book – who uses humour to get himself through, and Tessa’s mother.

It is the latter character who had the potential to be the most interesting character in the book. She walked out on the family when Tessa was just 12, and avoids accompanying Tessa on her regular visits to the hospital. There is also Adam, the neighbour whose mother suffers with depression, who again could have been a great character. However I did feel that this book failed to go into enough depth, and I thought that a lot was left unsaid about these characters and their motivations. In fact I felt the book in general felt too rushed at times, and could have been longer and more detailed in places.

Overall, though, I did enjoy this book. The characters are interesting, even if some aren’t fleshed out enough, and the ways in which Tessa’s character changes say a lot about what she is going through. It is hard not to shed a tear at the end, and I think this is a good example of the Young Adult genre as it covers difficult subject matter with humour and heart.